Questioning our “Elf on the Shelf”

I don’t know if it’s her age (four and a half must be the magic number!) or what, but, Greta is totally Christmas-crazed this year. Everything about the holiday is new and exciting and wonderful and as you can imagine, it’s been a total blast. All she wants to do is bake and decorate and shop and wrap presents…it’s hilarious.

And another one of Greta’s favorite things to do lately is talk the ear off of our beloved Elf on the Shelf Christmas elf, Paul. For those of you who don’t know the story, Elf on the Shelf elves arrive at your home in early December to watch over the kids. Then, every night after everyone is in bed, the elf flies home to the North Pole to give Santa an update on the child’s behavior and every day when the little one’s wake up, the elf has moved to a new perch in the household. 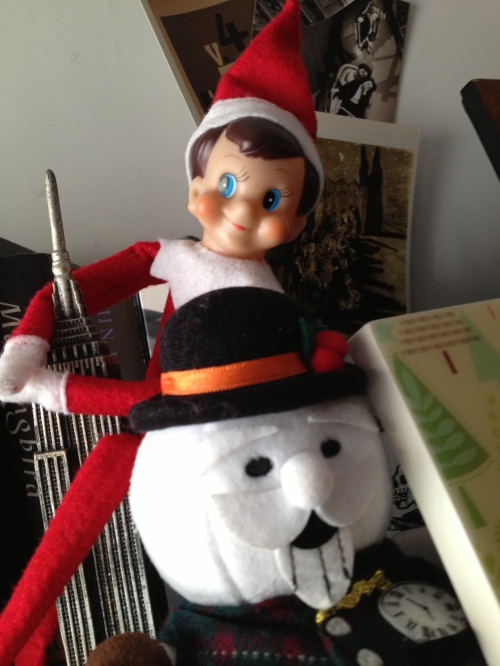 Aside from being a really cute and very fun tradition, the elf is also very useful as a disciplinary tool…especially when your wee one is throwing an epic, candy-fueled tantrum. I simply have to ask: “What would Paul think of that?” and Greta usually shapes up straight away. So, thanks, Paul!

Anyway, like I said, Greta loves looking for him every morning and actually spends a lot of time “chatting” with Paul about her day, what she wants for Christmas, I even caught her showing him some of her superfly new ballet moves one time. It’s very cute.

And then, this past weekend, everything changed when a very concerned Greta asked Mrs. Yeti and myself why Paul (who she had been carefully scrutinizing all afternoon) has a tag on him. “I thought he was real, but he has a tag, like a toy.” Greta said. “Is Paul a toy?”

Stunned by the question, Mrs. Yeti and I shared a blank look and then I quickly replied that the tag was like the luggage tags that we put on our suitcases when we fly on an airplane and that Paul has one in case he gets lost on his way to the North Pole every night. Greta stared at us for a long skeptical beat and then muttered: “Hmmm…OK.”

I think she bought my story, but, Greta is a pretty observant kid, so, I’m afraid the magic of Paul might not last as long as we’d hoped. And I still can’t help wondering why the fudge Paul has a tag in the first place?! I mean, I know there are laws about all that stuff, but, surely the Elf on a Shelf could have a freaking removable tag! Urgh…

And on top of all that, we went to see our usual Santa this weekend and Greta said she needed to come up with something else to ask him for since she already told the low-rent Santa we saw a couple of weeks back at a street fair what she wanted. Thinking fast, we told her that the previous Santa was just one of the man in red’s helpers, and that seemed to work. But, wow, this magic of Christmas business is hard work, man…