I know I’m a week late on this one, but seeing as we have watched this badass new Star Wars trailer probably a hundred times this last week alone there was just no way I could not share it here. In the past week I have been training my own little Jedi on the history and lore of the Star Wars universe and priming her for what to expect from the next chapter, J.J. Abrams hotly-anticipated Star Wars: The Force Awakens.

Hell, I even sat through The Return of the Jedi with her on Sunday. Greta loved it, but let me tell ya, Jedi has not aged well, amigos. There were a few scenes that were so bad they actually made me question whether The Phantom Menace really is the worst film in the series. I mean, some of those “heavy acting” scenes with Luke and Leia…yikes! Needless to say, Greta and I are ready to get this new trilogy started already! Seriously, when can we get in line?!

And now, even though you’ve probably seen it a hundred plus times already yourself, here again is the second official trailer for Star Wars: The Force Awakens. Happy Trailer Thursday!

Star Wars fans everywhere rejoiced this week at the news that director J.J. Abrams had finalized the cast for his upcoming and still untitled, Star Wars sequel. Even cooler than the confirmation that old favorites like Mark Hamill, Carrie Fisher and Harrison Ford would definitely be returning was the news that such bad-ass actors as Girl’s star Adam Driver, Inside Llywen Davis lead, Oscar Isaac, Max von Sydow, and the man who plays Gollum, Andy Serkis will be joining the franchise as well. 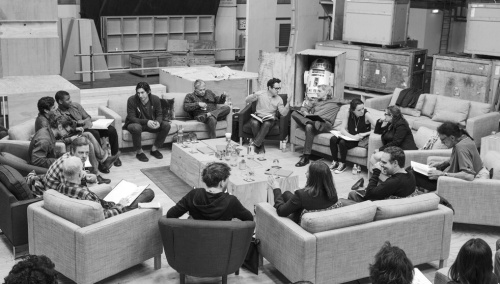 And even though there was only one new female cast member announced (newcomer Daisy Ridley) Abrams has hinted that there may be more to come in the weeks ahead, so, you never know.

I’m just hoping they cast someone to play Anakin’s former Padawan, Ahsoka Tano. Tano was, by far, the coolest character to emerge from The Clone Wars animated series and her fate was left very much in limbo at the end of the televised series. So, the thought of her character re-emerging in the live action sequels is almost too cool to contemplate. Seriously, I get goosebumps just thinking about it! Go, Ahsoka!

To read more Star Wars: Episode VII casting news, click here. And in the meantime enjoy this amazing pic of the new cast at a “table read” with Abrams. I love how R2-D2 is there in that little packing crate too…so rad!