Most people knew him as Mr. Spock, but I'll remember Leonard Nimoy best as the host of the spooky-ass TV show In Search Of. Man, I can't even begin to tell you how many sleepless nights my brother and I spent watching that show. The creepy theme music and archival footage was scary enough, but it was Nimoy's voice that really killed us. Whew, that show scared the shit out of us, especially when we watched it on my Mom's old B&W TV. Terrifying!

The Bigfoot and various UFO episodes were probably the most memorable, but, it was the Bermuda Triangle episode that seriously haunted my dreams. I actually lived in mortal fear of being sucked into the Bermuda Triangle for years. In fact, I still get creeped out every time I fly over water. But, hey, don't take my word for it. Check out the clip and see for yourself! So scary!

I actually met Nimoy a couple of years back at the 36th Annual Saturn Awards. I think he was there for some sort of Lifetime Acheivement award or something. Anyway I took a picture with him afterwards and he was one of the sweetest, most gracious celebrities I've ever met. Which was kind of shocking considering that he spent most of his life no doubt hounded by crazy Trekkies and film geeks like me. Not only was he friendly, cool and totally down-to-earth, but Nimoy was genuinely nice to boot. I met a lot of cool folks that night, but he was my favorite.

Thanks for all the memories, Mr. Nimoy. You will be missed… 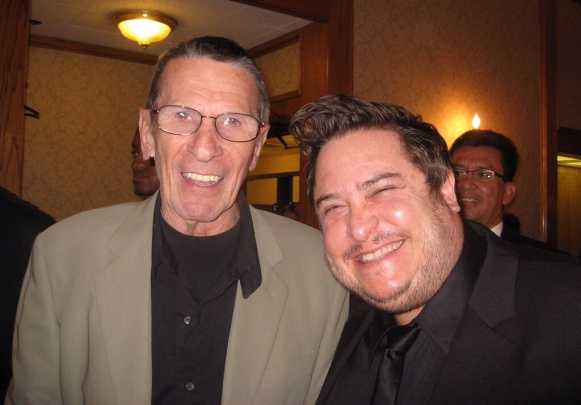