OK, I tend to be pretty generous where Star Wars is concerned. I worshipped the original trilogy as a kid, I loved the second two prequel films (Revenge of the Sith actually made me cry at the end!) and I thought the various iterations of the animated Clone Wars series were pretty solid with a few moments of true greatness peppered throughout. But, the latest addition to the Star Wars universe, the DisneyXD animated series, Star Wars: Rebels is straight up amazing!

I never thought I would say it, but, selling Star Wars to Disney a few years back just might be the smartest thing George Lucas has done in decades! Rather than water down and Disney-fy the franchise, the influx of new ideas and behind-the-scenes talent like Clone Wars veteran Dave Filoni and Star Wars über fan, director/producer Simon Kinberg has injected new life into what many fans once saw as a creatively bankrupt franchise, at best. 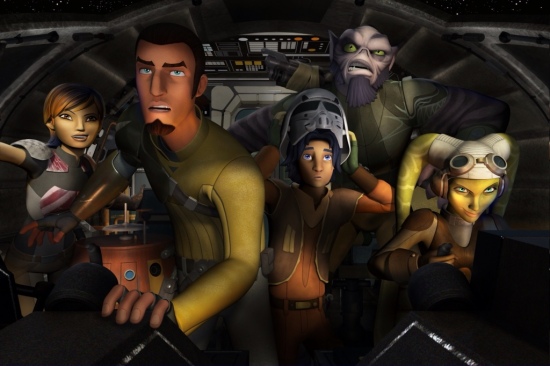 I mean, sure, I've watched just about everything that's been churned out over the past decade, but that doesn't mean it's always been good. But if the rest of the season lives up to Star Wars: Rebels' thrilling, action-packed pilot “movie,” then sign my Jedi ass up!

Seriously, this is top-notch Star Wars storytelling here! Cool, beautifully crafted characters with actual backstories and emotions, awesome action set pieces and best of all, one of the coolest storylines since the original trilogy. Set five years before the events of Star Wars: Episode IV – A New Hope, Rebels follows the adventures of the ragtag crew of the Ghost as they sow the seeds of rebellion in a galaxy that has begun to grow weary of the galactic empire.

I know that sounds impossibly geeky, and it is, but it's also one hell of a ride. Centered around the adventures of the newest member of the Ghost crew, a Force sensitive orphan named Ezra, Rebels really went into overdrive when they revealed that the leader of the Ghost team, Kanan Jarrus, is actually one of the last surviving Jedi knights. Cooler still is the fact that Jarrus offers to train Ezra in the ways of the Force is he joins them. Does it get any cooler than that? Seriously, Greta and I were cheering out loud when Jarrus whipped out his lightsaber for the first time. So rad!

Of course, we're only on the third episode, so, the series could totally fall apart at any minute, but for now, I'm basking in Star Wars perfection. It's been a long time since there was anything this good in the new Star Wars universe and I'm gonna enjoy it!